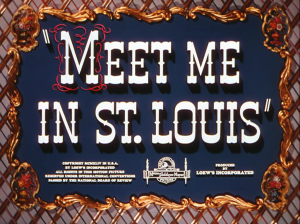 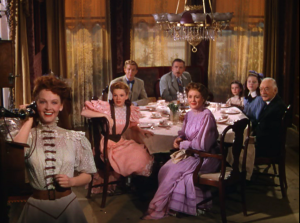 Family dinner in the Smith home is interrupted by a long distance phone call for Rose.

St. Louis in the summer of 1903 and the residents of the city are looking forward to the city becoming the focus of attention with the Louisiana Purchase Exposition World’s Fair of 1904.  The Smith family is not immune from this excitement with the film opening with different members of the family singing the title song, Meet Me in St. Louis.  The film follows the Smith family through a year in their life, many of the vignettes featuring the children of the family as they grow up and face trials of their own.  From “Tootie” (Margaret O’Brien) proving that she is no longer the baby of the family to Esther (Judy Garland) navigating falling in love for the first time with the boy next door.  In between it all, the family patriarch Alonzo Smith (Leon Ames) has accepted a new position in the bank which will relocate the family from their beloved St. Louis to New York. 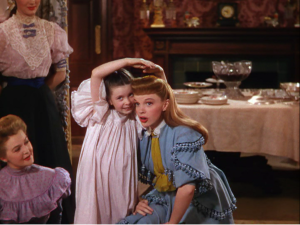 Garland and O’Brien performing together “Under the Bamboo Tree”

It’s been famously told that Vincente Minnelli when talking to Louis B. Mayer about this film described it as the year in the life of a family, and it is this family that makes the film so special.  Though an ensemble cast with Hollywood veterans such as Mary Astor, Marjorie Main, and Leon Ames, the film’s star is Judy Garland.  It’s hard to believe that the film that would become one of her biggest was the film that she did not want to make.  Garland, 21 at the time was eager to play more adult roles and break away from the juvenile characters that made her famous.  It was her collaboration with director Vincente Minnelli that would help her begin to create her image that would transition her into those adult roles.  However, despite Garland the film is almost stolen by a seven year old Margaret O’Brien.  O’Brien to this day talks fondly of her time making Meet Me in St. Louis and working with Garland.  Making this film marked a happy time in Garland’s life, and much like their characters in the film who were sisters, Garland treated O’Brien very much like a younger sister. 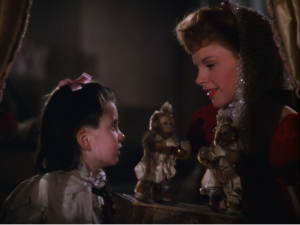 “Meet Me in St. Louis” introduced audiences to “Have Yourself a Merry Little Christmas” which would become a holiday standard.

The story is based on a collection of short stories written by Sally Benson which were inspired by her own family and childhood growing up in St. Louis and later moving to New York.  After the rights were purchased by Arthur Freed  it took four different screenwriters to deliver what became the classic story that audiences loved and becoming the quintessential MGM musical from which later musicals would be based.  Though set around the basic premise of family life, the family and their events are so endearing that help this movie remains a classic for generations since its release.  The film also was the dose of the traditional American family which World War II audiences were craving.  The film also introduced audiences to songs such as Have Yourself a Merry Little Christmas which would become a holiday standard.

Follow the link for more images from Meet Me in St. Louis.  Pinterest Board: Classic Movie Night Recommendation 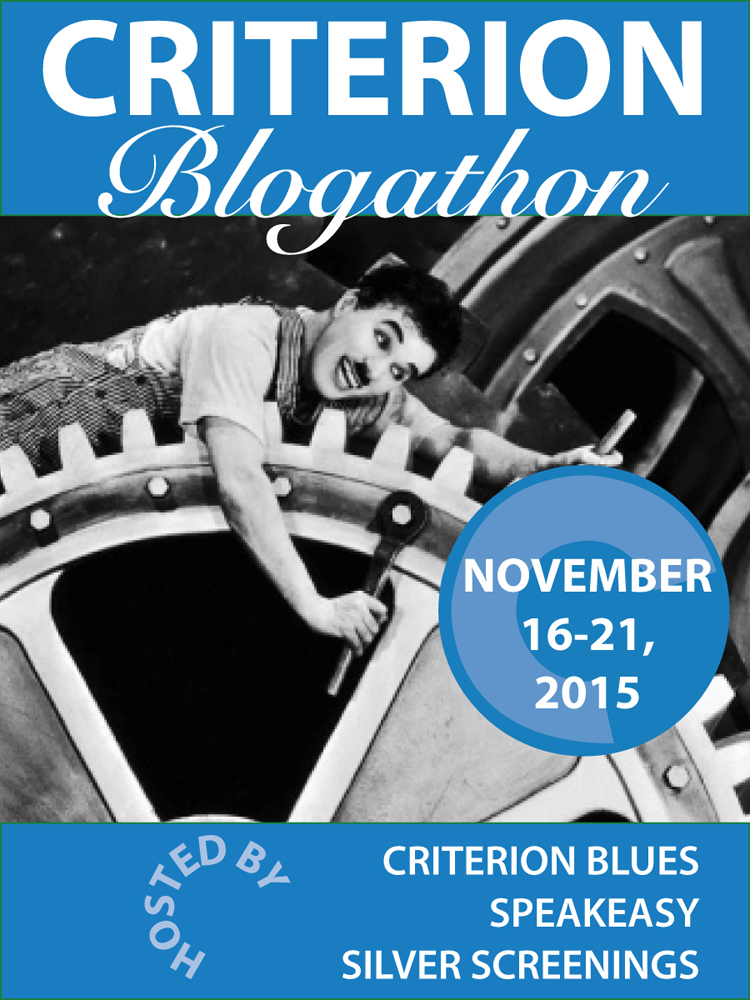 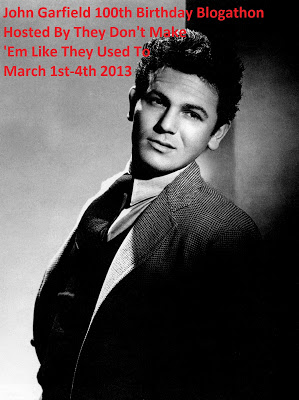