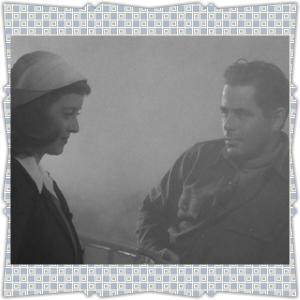 “I wonder what people would do if the world should end? Like this. Then they’d have time to say all the things they’ve always wanted to say. Then they’d have the courage to say them….Lonely people want friends, but they have to search very hard for them. It’s difficult for them to find…” –Kate
“other lonely people.” -Bill

Kate (Bette Davis) rushes to catch the ferry to the island to meet her cousin; she misses the ferry and the next won’t be till the morning.  She persuades Bill (Glen Ford) to give her a ride in his motor launch that is full of supplies for the lighthouse.  During the trip, Kate sketches a picture of Bill.  Kate is artistic, sensitive and playful, and she is interested in getting to know Bill.  Bill is an assistant at the lighthouse; he has turned down offers to work as an engineer because of the freedom working at the lighthouse affords him.  He and Kate grow closer finding they both understand the other.

Bill is to leave town for a job and makes a lunch date with Kate.  However, instead of having lunch with Kate he lunches with Pat (Bette Davis), Kate’s twin sister.  Pat now sets her sights on Bill and he falls for the flashy and stylish other sister.  Heartbroken, Kate steps aside and Bill and Pat marry.

“It’s like you were a cake without any frosting. And I guess most guys they kind of like the frosting…” -Bill
“Today you think I’m well frosted?” -Pat

Kate now throws herself into her painting, working with the moody and sullen Karnock (Dane Clark).  Despite Karn’s attempts to change Kate’s views on life and love, Kate is still in love with Bill.  Needing to get away, Kate returns to the island.  Also, there Pat, who has decided not to join Bill on a business trip to Chile.  As Kate can tell, Pat seems to have made changes in her life since marrying Bill, and has now taken up sailing.  To show off her skills, the twins go out sailing.  The weather turns bad and Pat drowns, while trying to rescue her sister.  Kate looses grip of her hand and Pat’s wedding ring slips off into Kate’s hand.  Now everyone thinks that it is Pat who survived the accident, and Kate has a chance at the life she wanted with Bill.  However, she soon realizes that Pat’s life was not as perfect as Kate thought it was. 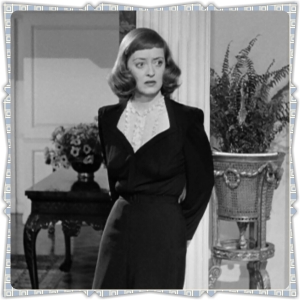 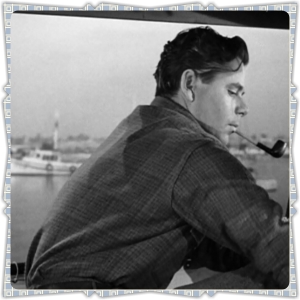 When Bette Davis signed her new contract with Warner Brothers in 1944, it included a clause to allow her to produce five films over the course of the contract.  Davis took this seriously starting with A Stolen Life.  She insisted on being involved in all decision-making including director Curtis Bernhardt and writer Catherine Turney.  Davis was also instrumental in casting Glen Ford in the role of Bill.  Ford had just returned from service in World War II, and was still under contract to Columbia Pictures.  Upon Davis’ insistence, Jack Warner agreed to borrow Ford from Columbia.  Davis and Ford would reprise their roles in this film for the Lux Radio Theater broadcast on August 25, 1947.  It is said that because of his performance in this film, Ford was chosen for his role in Gilda.  Later when Ford was an in demand star, he would insist that Bette Davis be cast in the role of Apple Annie in A Pocketful of Miracles (1961). 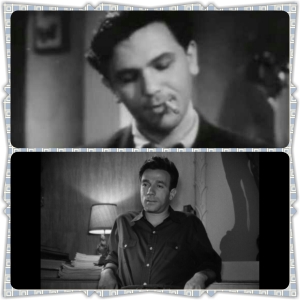 Also in the film is character actor Walter Brennan as Eban Folger, the cranky lighthouse keeper.  Note that Walter Brennan had a small role in our recommended film The Invisible Man (1933) as the man who had last week, his bicycle stolen.  Brennan would make this film the same year he appeared opposite Henry Fonda in My Darling Clementine (1946).  Another supporting player in the film is Dane Clark would play Karnock the moody and embittered artist.  His role in this film is very reminiscent of an early John Garfield in the film Four Daughters.  (TCM will be showing Four Daughters the following evening, May 1st, so you can decide for yourself)  Like Garfield, Clark would start on the Broadway stage before make his way to Hollywood.  He would appear alongside Garfield in the film Pride of the Marines (1945).

Davis would also take the lead in deciding how she would portray the role of the twin sisters.  She insisted on not using physical gimmicks such as different hair styles and clothes, but would rely on her own acting to portray the two characters.  In fact, it is three characters Davis would play in the film: Kate, Pat, and Kate pretending to be Pat.  Bernhardt in his directing would go beyond simply having the two side-by-side in scenes together, for realism he wanted the two characters to interact.  So in the film you’ll see them lighting cigarettes for the other and playing with the other’s sleeve while talking.  This was accomplished with the use of mattes, a portion of the image would be masked and another image was added later.  For Davis fans this film is enjoyable because of the double roles of Davis.  The audience gets the best of both versions of the famous actress, Davis as the bad girl and Davis as the good girl. Bringing you the latest reviews of all forms of Media