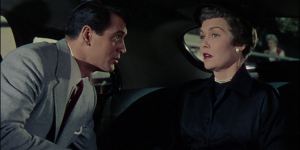 An over-the-top 1950’s Hollywood melodrama, describes Douglas Sirk’s 1954 remake of the film Magnificent Obsession which originally stared Irene Dunn and Robert Taylor. In this version, playboy Robert Merrick (Rock Hudson) lives a reckless and fast paced life; he works hard and plays harder. When involved in a life threatening speedboat accident, Merrick’s life is saved. However, in exchange for Merrick’s life, the saintly Dr. Wayne Phillip’s dies lacking the medical equipment that is being used to save Merrick. From this point on the story revolves much around Merrick and his encounters with Dr. Phillip’s widow Helen (Jane Wyman), but the story also involves the late Dr. Phillip’s and his philosophy in helping others. Merrick will receive the divine message, but it will make little sense to him till Helen is made blind because of his own clumsiness. Despite all of this, Helen will fall in love with Bob, but not without more tragic and emotional bumps in the road. After all this is a Douglas Sirk melodrama.

During his association with Universal-International which lasted from 1952- 1959, Sirk made a name for himself with lush, colorful melodramas which featured the top actresses of the time. Sirk believed himself an artist and that the film screen was his medium, he used lighting, color and music to accentuate the over dramatic plots he presented to audiences. Under Universal-International Sirk was able to find the freedom to make his types of films. Despite being at the top of his career in 1959 with the release of Imitation of Life (another remake of an earlier classic), Sirk left Hollywood to settle in Switzerland never to make another movie again. 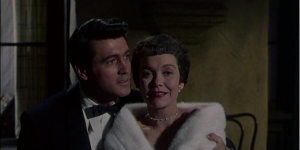 Magnificent Obsession was Rock Hudson’s breakthrough role as a leading man in Hollywood, and solidified his career for the rest of the 1950’s and throughout the 1960’s. The popularity of his teaming with Jane Wyman would be repeated the following year in All that Heaven Allows (1955). Ironically, this next film would center on the May-December romance of the Hudson and Wyman characters. The eight year age difference, though noticeable on film, was not mentioned in the prior film. Magnificent Obsession focused more on the changes Hudson’s character must undergo to be “worthy” of taking his place in the world which inevitably meant he would become the replacement of Dr. Phillips in philosophy, career, and love. 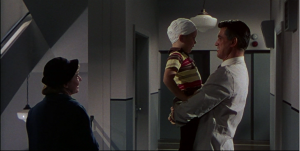 Beyond the story line of the typically Sirkonian melodrama is the central message of achieving success with one’s own destiny. In order to find fulfillment with one’s own self, one must be a servant to those that are in need. The character of Merrick has always been able to stay out of trouble though monetary exchange. However, he learns that with this philosophy it is not about what a person gets out of it, but doing kind things for others without recognition or repayment. Helping others should be about doing the right thing because you have the resources to do so and in return the universe will reward you. 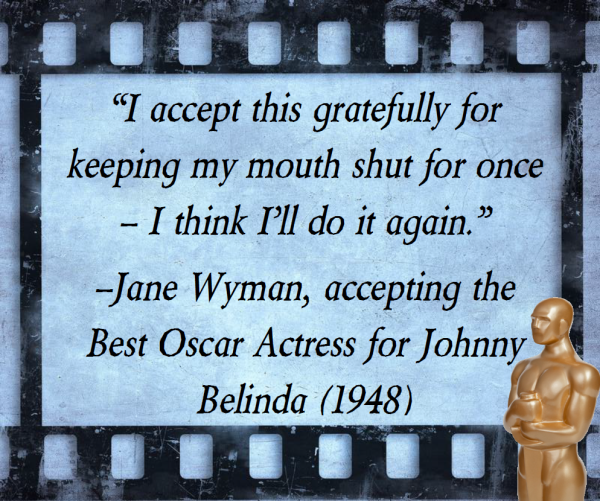 George Reeves with Burt Lancaster in “From Here to Eternity”

On a busy Coney Island beach two mothers meet and become friends when their daughters become playmates at the beach.  Lora Meredith (Lana Turner) is a young widow with dreams of becoming an actress.  She struggles to make ends meet balancing auditions and meetings with agents, and caring for her daughter Susie (Terry Burnham, age 6; Sandra Dee, age 17).  Annie Johnson’s (Juanita Moore) husband abandoned her and their daughter Sarah Jane (Karin Dicker, age 8; Susan Kohner, age 19).  She has been unable to find a job, and the two are now homeless.  As an African-American, Annie struggles to raise her fair-skinned daughter who longs to fit in the white world.  Lora offers for Annie and her daughter to stay temporarily at her small apartment.  Days turn into years as the woman become friends and each others support.

Much of Lana’s personal drama was her own troubled relationship with her own teenage daughter. This seems to be mirrored in Peyton Place (1957) and Imitation of Life (1959).

In the 1950’s Universal International producer, Ross Hunter, and director Douglas Sirk were creating women’s melodramas.  Some of these films included, Magnificent Obsession (1954), All that Heaven Allows (1955), There’s Always Tomorrow (1956), Written on the Wind (1956).  All of which are over-the-top soap operas featuring actresses such as Barbara Stanwyck and Jane Wyman.  When approached to star in Imitation of Life, Lana Turner’s career was struggling having been damaged by her own personal dramas.  In April 1958, her teenage daughter stabbed and killed Lana’s then lover, mobster Johnny Stompanato.  Lana was deeply in debt and needed to revive her career.  Hunter offered her a lavish production to star in, a remake of the successful 1934 film of the same name that had starred Claudette Colbert, and the chance to make a lot of money.  Lana chose to not take her usually salary in favor of a percentage of the net profits from the final distribution.  This chance paid off, and Lana made over two million dollars from the film.  Hunter lived up to his end of the bargain, from the opening credits with diamonds falling from the top of the screen, it is understood that this film is going to be lavish, expensive, and gorgeous.  Everything is big and overdone in the film, including the acting. 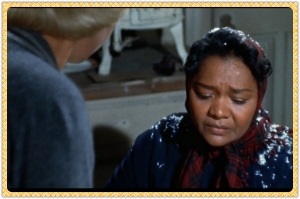 “How do you explain to your child she was born to be hurt.” -Annie 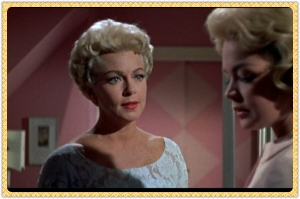 “So Annie told you. That’s how you usually find things out about me….Let’s face it Mama, Annie’s always been more like a real mother. You never had time for me.” –Susie

Though the film explores issues with race, the real heart of the film is both of the mothers’ relationships with their daughters and each other.  From the beginning Lora is obsessed with becoming an actress.  When success does come, she neglects her daughter choosing to give her a comfortable life over giving her time and attention.  As a teenager Susie begins to resent her mother’s decisions, often turning to Annie to confide in and seek advice.  In contrast, Annie loves Sarah Jane refusing to leave her despite the numerous rejections by Sarah Jane.  Sarah Jane believes that being white is easier and will offer her more privileges than being African-American.  However, Sarah Jane’s are continuously unveiled, often leading to disastrous consequences. 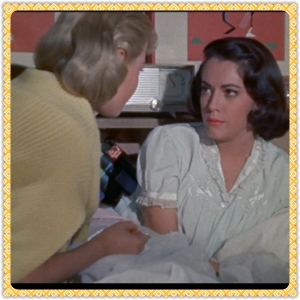 “I wanna have a chance in life. I don’t wanna have to come through back doors, or feel lower than other people, or apologize for my mother’s color.” –Sarah Jane

Both Susan Kohner and Juanita Moore were nominated for their performances in the film.  Susan Kohner though fairly new to film came from a Hollywood upbringing.  Her mother was Lupita Tovar a Mexican film actress who primarily acted in Hollywood films.  She is best known for her performance in the Spanish language version of Dracula (1931).  Tovar also starred in Santa (Saint, 1931), which was the first talking picture produced in Mexico.

Annie: “I know lots of people. Oh, hundreds.
Lora: “Really?”
Annie: “I belong to the Baptist church, and I belong to several lodges too.”
Lora: “I didn’t know”
Annie: “Miss Lora, you never asked.”

Just as important to the film, is the friendship between the two women.  Annie is the rock in which Lora and everyone else in the film leans upon, and is involved in every aspect of Lora’s life.  However, though Lora acknowledges Annie as her friend, selfishly she knows nothing about Annie’s life and troubles outside of the house.

Much in the style of other films of that time that explored the acting business; this film explores the ugly side of fame.  After years of struggling, Lana’s character Lora finally gets a small role in a Broadway play.  She becomes personally involved with a playwright and has growing success with his plays.  However, life is not as perfect as she thought it would be, and Lora continues to seek happiness in career success.  Through her lust for success Lora loses a relationship with her daughter and the chance at real love with photographer turned ad executive, Steve Archer (John Gavin).  In 1952, Lana starred in another such film, The Bad and the Beautiful which also explored the dark side of the business. 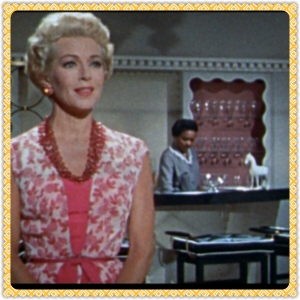 Lora: No matter what it costs, Susie’s going to have everything that I missed.”
Annie: “From her letters, she misses you more than she’d ever miss Latin.”

Also in the film is Troy Donahue.  Later that same year, Donahue would have his first starring role in the film A Summer Place (1959).  Donahue along with Sandra Dee played young lovers whose lives are complicated by the actions of their parents.  Donahue like Dee would be known for teen melodramas.  However, his small role in Imitation of Life shows a different side to Donahue’s acting.  He plays Sarah Jane’s boyfriend Frankie who beats her upon finding out she had been lying to him about her race. 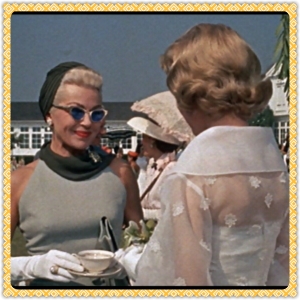 TCM will be showing Imitation of Life (1959) on Wednesday along with other Lana Turner films from the 1950’s.  This was a complicated time in the career of Turner.  However, this film brought her some of her biggest success reviving her career.  Click on the link below to read more about this stunning actress.